Bartman vs. The Destroyer (Original Version)

This past October, I shared "Bartman vs. The Destroyer", a transcript of a short story I wrote for my fifth grade class back in 1997. I decided I would be remiss if I didn't then share scans of the actual physical copy, as they came complete with crude, partially coloured illustrations. 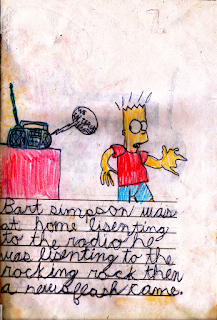 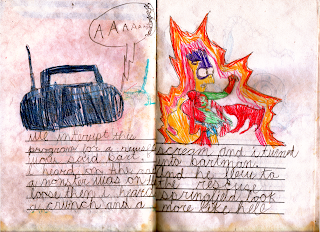 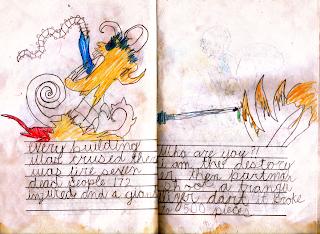 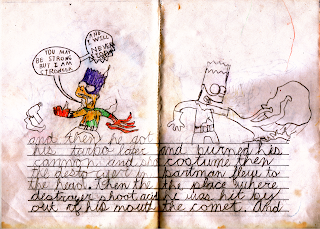 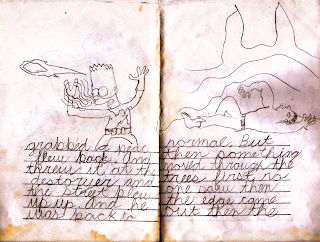 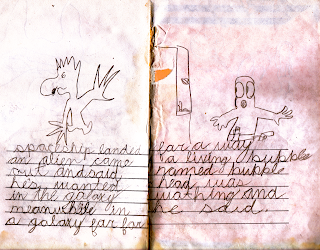 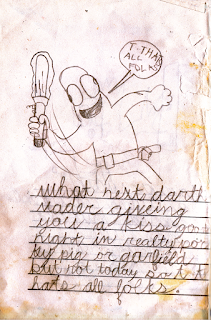 Even with illustrations providing context, the story remains nonsensical if you haven't read the Bartman comics I wrote in 1996-1998 or know about Bubblehead, the anthropomorphic bubble character I created in '97. I can only imagine what the teacher made of it after I handed it in to her.
Posted by Duragizer at 11:40:00 PM No comments:

The Divine Mercy is suddenly replaced with William Blake's etching, The Ancient of Days.

GHOST OF ROD SERLING: (V.O.; cont'd) But we aren't going to talk about that God today, for this tale is set in a universe created by an altogether different god.

A montage of paintings depicting the six Biblical days of creation plays out across the screen.

GHOST OF ROD SERLING: (V.O.): In the beginning God created the heavens and the earth. The earth was without form and void, and darkness was upon the face of the deep; and the Spirit of God was moving over the face of the waters.

An image of Linda Blair's face from The Exorcist exploding.

On the interior of a living room. The living room — painted in various shades of brown — is very spartan, adorned only with a few bits of furniture, a single tall lamp, and a sepia-toned photograph of Vincent Price hung upon the wall.

In an uncomfortable-looking metal chair sits NAIAD, a pretty twenty-something redhead. She keeps her hands folded in her lap with her legs closed tightly together. Wearing a blue-&-white polka dot dress, white apron with lacy pink trim, and large unwholesome smile, Naiad is the picture of the typical '50s proletarian housewife.

Parting her legs, Naiad reaches under her dress, withdraws a purple popsicle, and proceeds to suck it.

RAZE'S VOICE: (O.C.) I hope you brought enough to share with the rest of the class, young lady!

NAIAD: Did you pick up your cheque?

RAZE: No! That goof boss of mine didn't give it to me! He says I've been jacking off on the job!

NAIAD: But everyone jacks off on the job! It relieves tension!

NAIAD: Well, I don't care so long as you still love me.

Crestfallen, Naiad stops jiggerbugging and crosses over to the Victrola. Taking the record off the turntable, she throws it against the wall, shattering it.

Fawdor collapses to his knees.

Fawdor sits in his director's chair, a cameraman beside him. Naiad & Raze are on the set, the REANIMATED CORPSES of JOHN HOLMES & SHYLA STYLEZ performing with them. Naiad is tied down to a mechanical bull, helpless as John force-feeds her blood sausage after blood sausage. Raze, chained to a pillar, is forced to watch while Shyla, crouched down between his spread legs, chugs down a 1-litre bottle of cream soda. Taking in more than she can swallow, she reels around and spews cream soda all over John and Naiad.

RAZE: How come you never drink my cream soda?

Fawdor is busy splitting and splicing reels of film when he hears a knock at the door. Leaving his equipment, he goes to answer it. On the other side stands NICOLAS CAGE in a black Superman costume.

SUPERCAGE: Up, up, and away!

LORD FAWDOR: My God! It's full of stars!

Fawdor's head jumps to hyperspace.
Posted by Duragizer at 1:26:00 AM No comments: